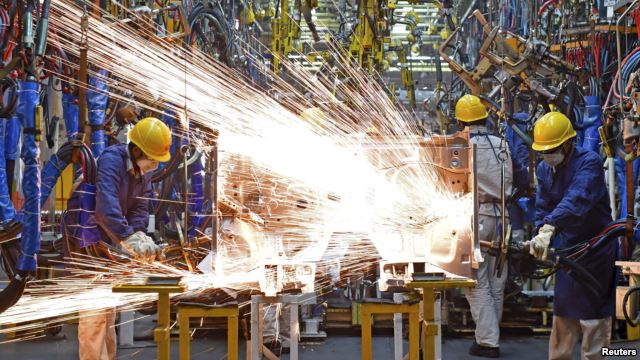 China’s economy will grow slightly faster than expected this year at 6.9 percent and its shift to fostering services and private consumption is helping to support regional growth, the Asian Development Bank said Thursday.

An ADB report said Asia’s developing economies remain resilient to economic weakness in industrialized countries and are on track to grow 5.8 percent in 2015 and 6 percent in 2016.

It said Asia’s growth is supported by vibrant private consumption and services in China. Expanded industrial production in India and other countries also buttressed the regional economy even as countries reliant on commodities were hurt by the global slump in prices, a slow U.S. recovery and Japan’s contraction.

“Although we have seen some softening in a number of economies, the broader regional outlook is for continued steady growth,” said ADB Chief Economist Shang-Jin Wei.

The ADB in September forecast China’s economy to grow 6.8 percent this year and 6.7 percent next year. Thursday’s report maintains the forecast for 2016, saying further growth in consumption and services will support the economy despite a housing overhang and excess industrial capacity.

Central bank and government measures to stabilize the economy and to bolster small and medium-sized enterprises also provide some comfort, it said.

Chinese growth has slowed steadily over the past five years as the ruling party tried to steer the economy to a more sustainable expansion based on domestic consumption instead of trade and investment.

Southeast Asia’s growth prospects were also unchanged from September’s forecasts of 4.4 percent for 2015 and 4.9 percent for 2016. But a slight softening is seen for Indonesia, the largest economy in the sub-region, due to lower-than-expected budgetary disbursements and weakness in exports.

The report said South Asia is on track to meet previous growth projections of 6.9 percent in 2015 and 7.3 percent in 2016. Continued strength in India supported by growth in industrial production, public capital expenditure, and retail sales are helping to offset slowdowns in Bhutan, Maldives, and Nepal.

Forecast growth for India was maintained at 7.4 percent in 2015 and 7.8 percent next year.

The outlook for Central Asia was downgraded to 3.2 percent in 2015 from the earlier forecast of 3.3 percent, while the projection for 2016 is down to 3.3 percent from 4.2 percent. Low commodity prices, particularly oil and gas, and the slow recovery in the Russian Federation continue to drag down the region’s economy.