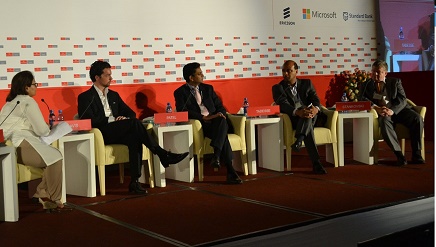 Ethiopia’s financial and telecom sectors were at the center of discussions during this week’s the Economist Ethiopia Summit. The country’s officials show signals to open the financial market for foreign investors after some time, while they indicated that Ethiopia has no intention at all to entertain foreign telecom operators.

At the summit opened on Wednesday by the Prime Minister Hailemariam Desalegn, some of the invited panelists stressed the financial shortages and other conflict of interest related challenges the country is facing while trying to transform itself to middle income country in a decade.

Meanwhile some panelists mentioned some of the major challenges the country is facing to realize its ambitious growth targets due to shortage of finance.   One of the panelists who advised Ethiopia to open its financial sector for foreign banks was Managing Director of the oldest United States Wall Street bank Goldman Sachs.

“When we start talking of Ethiopian banking system, is based on a simple question. The banks are supposed to channel savings into investments to allocate capital. Therefore, question number is, Are Ethiopian banks doing it efficient? And if the opening of that system is going to make it more efficient instrument on allocation of the capital. The second question is whether domestic savings in Ethiopia are sufficient to finance ambitious investment program? In my view the answer for this questions is probably no,” he said.

“…Therefore, to me the opening of the banking systems [to foreign banks] is only two things. One, the ability to bring in foreign banks, who can bring in their own capital and who can bring their own expertise and distribute this capital and expertise domestically here in Ethiopia. And second allow the Ethiopian banks to borrow internationally. Because let’s ask ourselves a question, ‘who is in a position to access foreign finance services?’…Probably government, because government will have to rely on entire taxation system and therefore foreign creditors and investors feel safe. But the government is backed against the rule with the World Bank and the IMF imposing limits on non-concessional loans,” Stankovski elaborated his points.

“Therefore they are limited in their choices on what they can borrow. If we take one example, from what we heard this morning, Ethiopian Airlines is in a position to access international borrowing without government guarantee. Banks are more sophisticated; they will have their accounts audited. Therefore international creditors and investors will feel more safe with the banks allowing them to borrow then redistribute this money within the Ethiopian economy,” he said, further expressing his concern about the existence of fair playing ground in a country where the state bank, which has half of the market share of the banking sector of the country, operates.

“A lot has been done and a lot more can be done. The key issues can be how three different groups can find what they need. One is the private sector; one is the government and one is state enterprises. The 3 percent of GDP deficit of the government can be met by domestic and foreign borrowing.   The two bigger challenges funding state enterprises and on the private sector financing,” said Helaway Tadesse, Vice President of Zemen Bank, one of the 16 private local banks operating in Ethiopia.

Stating that private banks profit is affected due to the lending limitation cap introduced by the central bank that forces each bank to buy government bond with 27% its lending fund, Mr. Helaway also stated positive developments in banking sector of Ethiopia.

He noted that deposit has reached 360 billion (30% of the country’s 1.2 trillion birr GDP) with 2,500 bank branches across the country while there are 20 million accounts and 2 million debit card holders with several thousands of ATM and point of sale (POS) devices nationwide.

Ethiopian government, which set an ambitious target of becoming middle income country after a decade, has been investing heavily on infrastructure development over the past years. Even though the private sector and huge government projects has been delaying due to shortage of finances, the government has been resisting the advice and interest of foreign banks to operate in the country.

To finance its infrastructure projects the country has joined Euro Bond this year and accessed 1.5 billion euros. For its mega infrastructure financing, the government has been using a bilateral lending approach with governments and import exports banks of countries such as China, India and Turkey, among others.

While the country has also been allocating huge budget from its coffer through increasing its tax revenues by 20% annually on average.

With around $10 billion trade deficit, the county exports mainly primary agricultural products of worth around $3 billion per annum. The continued widening gap between the country’s import and export earnings along with the absence of foreign banks in the country, has been causing shortage of foreign currencies in Ethiopia.

One of the panelists, whose foreign private company has been investing in five sectors in Ethiopia, expressed his concerns about the problem in returning the company’s shareholders profit on time due to the shortage of foreign currencies in Ethiopia.

Amidst all these challenges, the government officials indicated that it is not yet the time to open financial sector for foreign investors even though the country continued aiming high with very ambitious development targets to realize its vision of making the country a middle income by 2025.