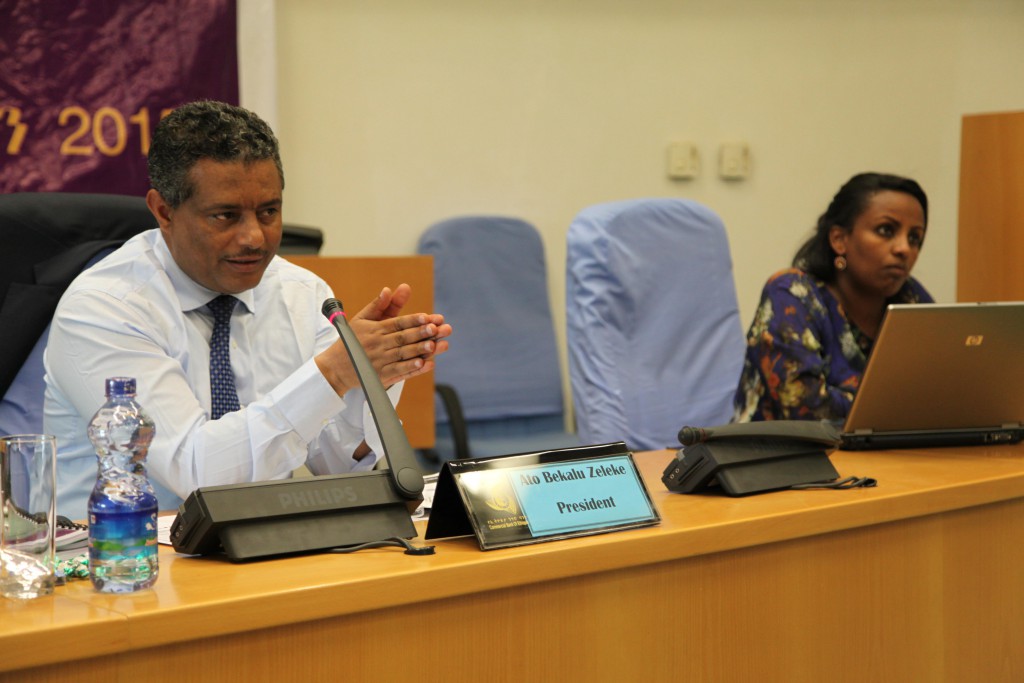 The Commercial Bank of Ethiopia reviewed the 2015/16 first quarter performance during its quarter meeting held at Mekele town for three days from October 23 to 25, 2015.

The three days meeting was led by the president, Mr. BekaluZeleke and was started with the presentation of the quarter report by Mrs. MeseretAsfaw, Director of Office of Strategy Management (OSM). The districts, processes and overall performance of the bank was thoroughly discussed by the participants.

During the discussion, it was revealed that in mobilizing deposit which has been taken as one of the major targets of the bank, three districts have registered a more than 100 percent accomplishment in mobilizing incremental private deposit while the remaining showed an encouraging level of accomplishment. The total performance in deposit mobilization has put the Bank’s deposit position at 244.3 billion birr which is higher than the June 2015 position of 241.7 billion birr.
During this first quarter of the 2015/16 budget year, it has been possible to collect 1.2 billion USD from various sources including export and remittance. The quarter’s loan collection and resource allocation endeavors have been more or less successful. It was possible to disburse a total loan of 14.8 billion birr to the various sectors and business activities.

The bank has endeavored to expand its customer’s base. About 523,542 new accounts have been opened which exceeds the target set for the quarter. The CBE’s accomplishment in this major target is contributing a great deal in promoting the saving culture of the society and mobilizing financial resource needed in the economy.

The total asset of the CBE also rose to 310.9 billion birr exceeding the June balance by 34.6 billion birr. Total income of the bank during the quarter was 6.5 billion birr while the total gross profit was 3.6 billion birr.
The CBE continued to expand its technology based services. The number of POSs increased to 2,692 from the June 30, 2015 position of 1,886. The efforts to increase the number of ATMs up time and other performance scales were also very much successful. The bank’s initiative to increase the number of card holders as well as the active users has shown an encouraging performance. During the discussion, it was stated that further efforts are expected in the coming three quarters to fully meet the targets set for the year.

In his closing remark, Mr. BekaluZeleke, President of the Commercial Bank of Ethiopia appreciated the efforts and commitments of the CBE staff and management for the achievements so far recorded. He also stressed the need for concerted efforts to do our level best to fully meet the targets set for the year and exceed our stakeholders’ expectation in all endeavors.